From this spectacular place you can see the Vette Feltrine and the city of Feltre. Looking further west you can admire the Belluno Dolomites.
In front of us there are some marvelous mountains, little known and worth to be discovered, praised and artfully described by the writer Dino Buzzati.
These places are included in the National Park of the Belluno Dolomites and in the UNESCO World Heritage Dolomites.

FELTRE: An entrance to the DOLOMITES World Heritage Site

The Dolomites entered the UNESCO World Heritage List in 2009 as a natural site for criteria VII (landscape beauty) and VIII (geological and geomorphological aspects). The UNESCO Dolomites are a serial site composed of 9 Systems (associated mountain groups). 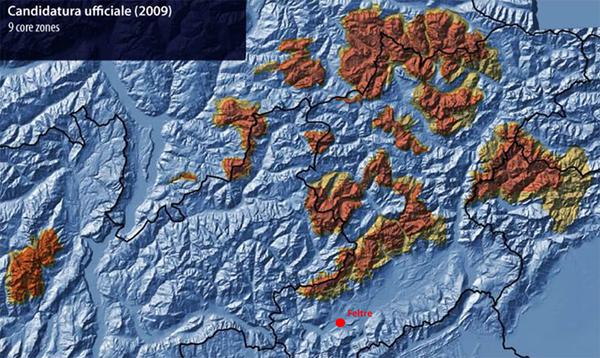 The territory of the Municipality of Feltre constitutes the 20% of System 3 - Pale di San Martino, Pale di San Lucano, Dolomiti Bellunesi and Vette Feltrine - of the UNESCO Dolomites with approximately 2031 hectares. System 3 in this area coincides perfectly with the borders of the Dolomiti Bellunesi National Park (www.dolomitipark.it). 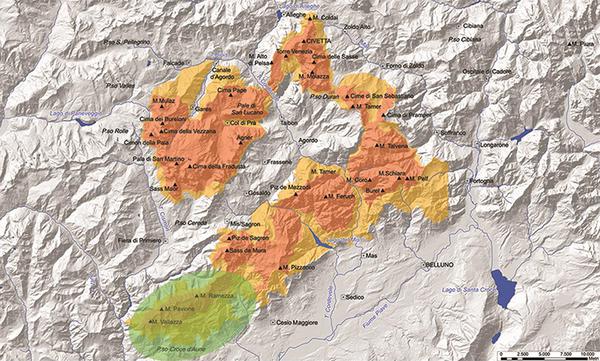 A WINDOW ON THE JURASSIC

From the place where you are, you can observe the Vette Feltrine in its entirety. They are mountains of great beauty and great naturalistic environmental value, fully included in the National Park of the Belluno Dolomites (www.dolomitipark.it) and in the UNESCO World Heritage Dolomites (www.dolomitiunesco.info).

The following discussion intends to describe these reliefs from a geological and geomorphological point of view in order to understand the structure of the landscape that characterizes them.

Stratigraphic values - from the Jurassic to the Cretaceous

The Vette Feltrine represent the most important area from the stratigraphic point of view of System #3 of the UNESCO Dolomites. These mountains are in fact made up of rocks that describe with great detail the Jurassic and Cretaceous evolution of this part of the Dolomites (about 200 to 65 million years ago). In the Dolomites panorama there are not many places where these rocks emerge and, here, it is possible to perfectly reconstruct the ancient environments that determined their genesis. To understand the paleoenvironmental context that saw the formation of the rocks of these mountains, it is necessary to immerse yourself in deep time, with the help of the following animated illustration which represents an interval that lasted about 130 million years.

The following image shows an environment characterized by some areas above the water surface, and by tongues of the ocean between them. The satellite photography portrays part of the Caribbean Gulf (Andros-Bahamas): an environment similar to the Dolomites landscape between the Triassic and Jurassic periods, when the rocks of the Vette Feltrine were formed. 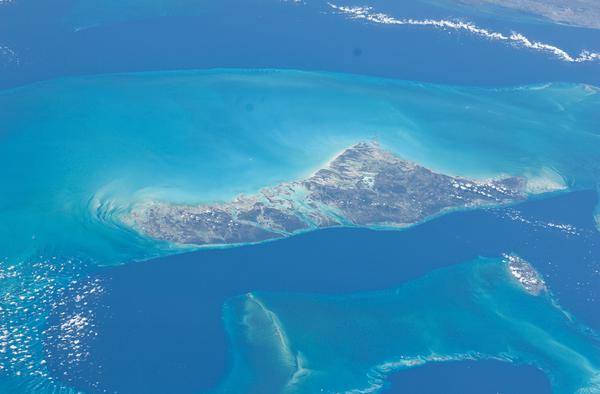 The paleontological importance of the Vette Feltrine has been documented since the 19th century. The findings of different types of ammonites made by the geologist from Feltre, Giorgio Dal Piaz, are worthy of note. Especially in the rocks named "Encriniti Glauconitiche" (in the Coston delle Vette and Col de Fontana area) and "Rosso Ammonitico" (in the Busa delle Vette, Busa del Cavaren, Pavione and Pavionet areas). In more recent times, important fossil sponges (both calcareous and siliceous) have also been found in the "Calcari Grigi" rocks of the Vette Feltrine. These fossils are unique in their kind in that their discovery allowed to fill a gap in knowledge on the evolution of sponges of these time intervals (Sinemurian, about 199-190 million years ago). These sponges represent a link between the species observed before and after the investigated interval. They are the oldest Jurassic sponges known in the Dolomites 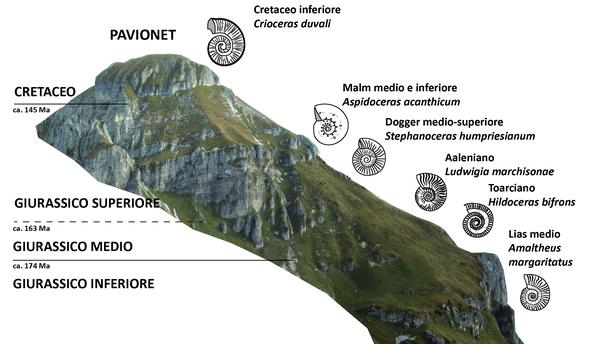 Structural values - the dance of faults

The Vette Feltrine are located between two tectonic lines that cut the rocks creating fracture planes deepening in opposite directions and a structure, between them, called "box fold" or "pop-up" by geologists.

The geological profile below highlights the structure of the peaks and allows us to understand the above diagram. In fact, the Belluno Line outcrops in the foothills to the south, whereas the associated backstroke outcrops beyond Monte Pavione.

The thrusts are low-angle faults, i.e. planes of rupture in the rocks where the collisional stresses between the plates responsible for the elevation of the Alpine chain are expressed by over-sliding portions of older rock over the younger rocks. It should be emphasized that the Valsugana Line -another major overthrust- also passes north of the Vette and parallel to the Belluno Line. Although at a regional level the Belluno Line has less impact than the Valsugana Line, at a local level it highly affected the arrangement of the Feltrine Summits.

The top part of the Vette Feltrine is characterized by rounded and blunt shapes, with high altitude meadows of great naturalistic value. In the context of the Dolomites the upper part of the mountains is usually vertical, while in the Vette the steep cliffs develop mostly in the basal and median bands. This is due precisely to the particular series of outcropping rocks, which includes the hard Main Dolomite at the base, followed upwards by the compact banks belonging to the Gray Limestones. The sequences of aforementioned abyssal rocks begin immediately above them (Rosso Ammonitico Inferiore, Formation of Fonzaso, Rosso Ammonitico Superiore, Maiolica, Scaglia Rossa). It is the Cretaceous terms of Maiolica and Scaglia Rossa that define the peaks and their gentle shapes.

This happens because of the erosion which acts differently on different rocks, rounding or digging hollows in the more tender ones. The peaks have a series of basins excavated during the last glaciation (about 20,000 years ago) and definitively modeled in more recent times; they are named the Buse (holes) delle Vette. There are several hollows, all beautiful. Glacial and periglacial morphologies and deposits offer landscapes of rare beauty. The dominance of limestone rocks in these contexts has also led to the development of important karst morphologies. An animated interpreted image of the Busa delle Vette is shown below:

Another important morphological emergence of the Vette Feltrine is the Piaza del Diaol (Integral Reserve of the Belluno Dolomites National Park), a strange natural square paved by limestones and almost covered by a thin grassy layer surrounded by an immense accumulation of blocks.
It is a place of mystery since an ancient legend wants it to be a place of confrontation between good and evil. In fact, it is said of a priest who sent the Spirit among these mountains to entertain a battle with the devil himself and with a plethora of witches, habitual frequenters of this strange place. But how could this bizarre geomorphology have originated? The so-called Piaza (plaza), surrounded by blocks, is explained by hypothesizing the presence of a rocky tower that collapsed on residual glacial tongues. The body of the collapse could then slip, arranging itself in a circular fashion.

Let's go back the landscape of the Vette Feltrine

As an effect of the geological heritage here described, the landscape of the Vette Feltrine now gets an explanation. These mountains present scenic and aesthetic elements of great value that complete the picture of great beauty that everyone recognizes in the UNESCO Dolomites. A territory that has been active and inhabited for millennia that has been able to impress and stimulate the creativity and feelings of locals and travelers who have crossed it. A mountain landscape made of rocks, debris, grasslands and woods, but also a marine paleo-landscape from the Jurassic and Cretaceous periods, preserved in it. We invite you, after this short presentation of the Vette Feltrine from this distal point, to discover them more closely, hoping to give you inspiration to face the challenges of the present and the future.